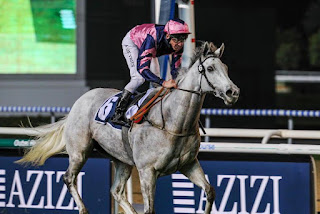 Going back to last week just the one bet at Meydan.Hypothetical in the 1 mile group three Firebreak stakes .As expected the five-year-old  bounced back to his best form ,making all for 3 lengh victory at 4-1 for tidy £240.00 profit .

This week going concetrate on the feature race The G2 Singspiel stakes at 4.55.

Trainer David O' Meara has reported the gelding will come on for that first run of the season. As normal will be coming from well off the pace,though with couple front runners in race should get nice pace to aim at.VALUE GUIDE PRICE 4-1 or ABOVE .

Of the others Zakouski can't be ruled out if fully wound up on his reappearance.Had some decent form at Carnival last season ,including finishing second in this race last year .Will need bounce back after poor run behind Lord Glitters in Bahrain Trophy .Drop back in trip should suit better ,though odds around 5-2 look very poor value .