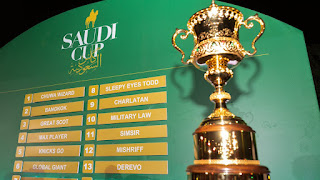 Won in 2021 by HRH Prince Abdul Rahman Al Faisal’s global superstar, Mishriff, now one of the most famous horses in the world, The Saudi Cup is beamed into more than 350million homes worldwide.

It is shown in every corner of the globe from the USA and Europe to China, South America and Southeast Asia. For the 2022 Saudi Cup the Jockey Club of Saudi Arabia is throwing open the gates and inviting spectators to join us at King Abdulaziz Racecourse in Riyadh to witness firsthand the third running of this spectacular horse race. Extra interest will be provided locally by the return of the globetrotting Mishriff, who will attempt to defend his Saudi Cup crown.

As well as The Saudi Cup, the raceday also features five highly regarded Group 3 races on both dirt and turf .