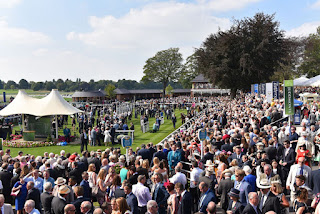 York Racecourse is a horse racing venue in York, North Yorkshire, England. It is the third biggest racecourse in Britain in terms of total prize money offered, and second behind Ascot in prize money offered per meeting.[1] It attracts around 350,000 racegoers per year[2] and stages three of the UK's 36 annual Group 1 races – the Juddmonte International Stakes, the Nunthorpe Stakes and the Yorkshire Oaks.

York is one of the Premier tracks in Europe having recently won the Flat Racecourse of the Year Award, for the fourth year, and also came out top in The Times newspaper survey of all Britain's racecourses.

The course is located in the south-west of the city, next to the former Terry's of York factory, The Chocolate Works. It is situated on an expanse of ground which has been known since pre-medieval times as the Knavesmire, from the Anglo-Saxon "knave" meaning a man of low standing, and "mire" meaning a swampy pasture for cattle.[3] For this reason, the racecourse is still sometimes referred to as "The Knavesmire". The Knavesmire was originally common pasture, belonging to the city.[4] It was also the scene of the hanging of Dick Turpin in 1739.[5]

The Ebor Festival is a four-day race meeting held at York Racecourse in York, England, each August. The 2022 Ebor Festival will take place from 17th to 20 August.[1].Was established in 1843 with the first running of the Ebor Handicap.Each of the four days has feature races:

Thursday is Ladies' Day and features the Lowther Stakes and the Yorkshire Oaks.

Friday is Nunthorpe Day and features the Nunthorpe Stakes, the Gimcrack Stakes and the Lonsdale Cup

Saturday is Ebor Day and features the Ebor Handicap  the Strensall Stakes. and the City Of York Stakes

(Selections will be posted on later in the week ) .