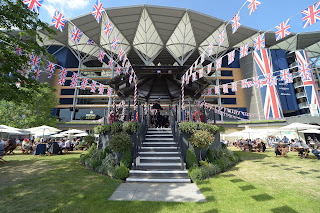 Ascot Racecourse was founded by Queen Anne in 1711, and has since received the patronage of a further eleven monarchs. The Ascot summer race meeting officially became a Royal week in 1911.

Ascot Racecourse is visited by approximately 600,000 people a year, accounting for 10% of all UK racegoers. The racecourse covers 179 acres (72 ha), leased from the Crown Estate and enjoys close associations with the British Royal Family, being founded in 1711 by Queen Anne and located approximately 6 miles (9.7 km) from Windsor Castle. Queen Elizabeth II attends Ascot several times a year.

Ascot currently stages 26 days of racing over the course of the year, comprising 18 flat meetings between April and October, and 8 jump meetings between October and March. The Royal Meeting, held in June each year, remains the highlight of the British summer social calendar. The prestigious King George VI and Queen Elizabeth Stakes is run over the course in July.

Royal Ascot evolved from the first four-day race meeting held at Ascot in 1768, although the meeting as it is known today only really started to take shape with the introduction of The Gold Cup in 1807.[8] Until 1939, Royal Ascot was the only race meeting held at the racecourse. The Gold Cup remains the feature race of the third day of Royal Ascot, traditionally the busiest day of the week, when high fashion and exquisite millinery take centre stage alongside flat racing's most elite stayers. During the racecourse's redevelopment in 2005, the Royal Meeting was held at York Racecourse.

Each of the five days of Royal Ascot begins with the Royal Procession at 2pm, when the Queen and other members of the royal family arrive down the straight mile in the Royal Landaus, accompanied by the playing of the National Anthem and the raising of the Royal Standard. This tradition was started in 1825 by King George IV.

Royal Ascot is Britain's most valuable race meeting, attracting many of the world's finest racehorses to compete for millions of pounds in prize money (just over 8.6 million in 2022 ). Approximately 500 horses race across the five days. Eighteen Group races, eight of them Group 1, are staged each year and are broadcast to audiences in almost 200 territories around the world.

Ascot employees increase by more than 6,500 temporary staff, with over 33,500 items of temporary furniture and 20,000 flowers and shrubs grown especially for the Royal Meeting.

There are four enclosures in total at Royal Ascot, three of them open to the public. The Royal Enclosure is the most prestigious, with access strictly limited. First-time applicants must apply to the Royal Enclosure Office and gain sponsorship from someone who has attended the Royal Enclosure for at least four years. Existing members are sent invitations by Her Majesty's Representative to request badges each year. Badges are hand written and can only be worn by the named person.[5] Colours of badges vary for each day of the Royal Meeting.

The Royal Enclosure has the strictest Dress Code, with men wearing grey, navy or black morning dress and top hat, and women wearing formal daywear and a hat with a solid base of 4 inches or more in diameter. The origins of the Royal Ascot Dress Code can be traced back to the early 19th century when Beau Brummel, a close friend of the Prince Regent, decreed that men of elegance should wear waisted black coats and white cravats with pantaloons to the Royal Meeting.

The Windsor Enclosure offers a more informal and relaxed atmosphere, with no formal Dress Code. Guests in the Windsor Enclosure are the first to view the Royal Procession as the enclosure is positioned to the east of the Grandstand along the Straight Mile. The Village Enclosure has been a successful addition since 2017 and is located on the Heath, in the middle of the racecourse. This enclosure, open from the Thursday to Saturday of the Royal Meeting, offers a combination of exciting street food, al fresco dining, live music and unique views of the track and famous Ascot Grandstand.

The annual Royal Meeting takes place over five days, each with a unique offering of racing and atmosphere. The week begins on a Tuesday, with the first race traditionally being The Queen Anne Stakes. Two further Group 1 contests normally take place on this day, which is surely the most enjoyable for racing purists. The King's Stand Stakes and The St James' Palace Stakes round off the feature races on the card.

The Wednesday of Royal Ascot provides a relaxed atmosphere off the track and an intense atmosphere on it, with the highlight on the card being the prestigious Group 1 Prince of Wales's Stakes, so memorably won in 2019 by superstars Crystal Ocean and Frankie Dettori.

Undoubtedly the most electric day of the Royal Meeting is Thursday, with the oldest and most prestigious race taking place – The Gold Cup staged over two-and-a-half miles, making it a stiff test for even the world's most elite long-distance horses. In 2020, this historic race was taken by reigning champion, Stradivarius, with jockey Frankie Dettori on board, for a third consecutive year. It is also the day where high fashion and millinery masterpieces take centre stage, and has been colloquially termed "Ladies Day".

The fourth day of the Royal Meeting features two Group 1 races in The Coronation Stakes and The Commonwealth Cup, whilst the final day, Saturday, offers a relaxed and social atmosphere. The quality of racing is no less top-notch, with The Diamond Jubilee Stakes being the feature race, won in 2019 by Blue Point, who famously became the first horse since Choisir to win the Diamond Jubilee and King's Stand in the same year.

The 2020 meeting was held behind closed doors due to the COVID-19 pandemic.

I will be covering all five days, with recommended bets posted each evening by 7.00 pm