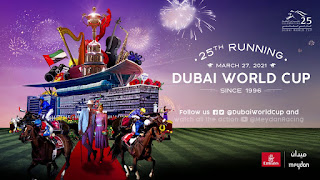 The Dubai World Cup, first held in 1996, is an annual event which has placed the UAE on the map and is home to one of the world’s top racing challenges, drawing the attention of millions of enthusiasts around the globe. The 25th running will be held on Saturday, March 27, 2021 and will showcase nine races,including five group one races,featuring some of the best-known names in horseracing.

The Meydan Grandstand and Racecourse will serve as a major business and conference district and a conduit for lifestyle, entertainment and sports. It extends 1.6km on a linear, ‘land scraper’ plane that has a full capacity accommodating up to 60,000 people.

Crowned by a dramatic, cantilevered Crescent Roof that features curved solar and titanium panels that maximize the building’s energy consumption efficiency, the iconic Meydan Grandstand is a unique and ‘intelligent’ development that is equipped with hospitality facilities that offer world-class services for discerning horsemen, patrons, travellers and guests alike.

It houses the world’s first five-star trackside hotel; The Meydan, which offers unobstructed views of the racetracks, and also houses an exciting mix of food and beverage establishments, a covered car park for up to 8,600 cars, the Meydan Museum and Gallery, an IMAX Theatre and the Meydan Marina. The Dubai Racing Club and Emirates Racing Authority and the new Meydan Freezone Corporation offices will also be located within the Grandstand facility.

Opened for the racing season on January 28, 2010, the Meydan Grandstand and Racecourse is best known for being the new home of the Dubai World Cup to be held on March 27, 2021. Prize money for the meeting of US$ 30 million attracts the best race horses in the world.

Corporations and high net worth individuals will be right in the thick of all the action from one of 78 exclusive Meydan Grandstand Corporate Suites which will offer guests unparalleled views, levels of luxury, customer comfort and integrated technology to create what will be the ultimate horseracing experience.

Born from the vision of His Highness Sheikh Mohammed bin Rashid Al Maktoum, UAE Vice President and Prime Minister and Ruler of Dubai, the Meydan Grandstand and Racecourse is culmination of what will be the definitive benchmark for any global sporting destination.

The Meydan Hotel: Will adjoin the Grandstand, with over 95% of the 290 rooms and suites having a direct, unobstructed Grandstand capacity: 20,000 tiered seating and over 60,000 capacity for the Grandstandiew of the racetrack.

Total car park wingspan (in the shape of a falcon): 1.3km

Other features surrounding the Grandstand include:

Facilities include world-class horseracing facilities such as receiving barns and stables for horses, all-weather surface practice track, jockey and horsemen’s lounges, amongst others.

(Selections will be posted on Friday )