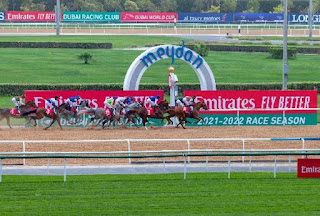 Nearly 150 horses from 16 countries have been accepted to run at the 2023 Dubai World Cup Carnival, which gets underway on Friday, January 6th at Meydan Racecourse.

With millions in prizemoney up for grabs across nine weeks of racing, the Carnival promises some excellent action on the turf and dirt tracks at the UAE's flagship racecourse. The action builds up to the Dubai World Cup, which takes place on Saturday, March 25th, for which a separate set of nominations will be received.

Week one at Meydan, the three feature races are the (Group two Al Maktoum R1 Challenge over Mile on the dirt) (Group two Al Fahidi Fort over 7 furongs on the turf) and Group Three Dubawi Stakes over 6f on Dirt .

For this weeks only bet I’m going concentrate on the group two Al Fahidi Fort at 4.55 UK time .

15 runners for the G2 Al Fahidi Fort over 7f furlongs on the turf .

No surprise to see the Charlie Appleby trained four-year-old gelding Noble Truth at the head of the market ,having won the G3 Jersey Stakes at Royal Ascot in good style back in June ,looks open to plenty improvement this season in group company, though Charlie Appleby has reported the horse will improve for the race, and makes no appeal at odds around 5/4 on first start for nearly 7 months .

At the prices the six-year-old gelding ALFAREEQ looks the each-way value at around 11-2 ,had some useful form last season including winning the G1 Jebbel Hatta over 9f .Also finished good second behind the useful Real World in Zabeel Mile .Made promising return at Abu Dhabi last month when finishing second in mile listed contest behind San Donato.Should improve for that race ,first run since last March .The drop back to 7f shouldn’t be problem ,having won over the trip at Abu Dhabi last season .Solid each-way claims .

Misty Grey looks best of the rest ,was very consistent performer last season ,including finishing close second in Supreme Stakes at Goodwood and creditable third in G2 Challenge Stakes at Newmarket behind Pogo in October .Not the best strike rate on turf ( 1 from 18 ) though is often in the frame and has  place claims .

Of the others Al Suhail would have decent claims on pick his form back in 2021 ,including winning the G2 Challenge Stakes impressively by 3.5L at Newmarket ,though was very disappointing in four starts last season ,including here at Meydan when tailed off in conditions race when odds on favourite,will need bounce back this season,though looks poorly drawn in stall 15 and makes little appeal on his reappearance.