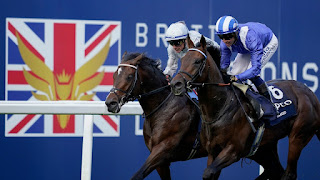 British Champions Day is a thoroughbred horse race meeting held at Ascot Racecourse in October each year since 2011, which acts as the end of season highlight fixture of British flat racing. It is the culmination of the British Champions Series and features the finals of the five divisions of the series, together with a valuable one-mile handicap race.[1] It is the richest day in British racing, with more than £4 million in prize money across the six races .

It was created by drawing together a number of historic races which had been features of Ascot and Newmarket's end of season meetings for many years. These were the Diadem Stakes and Queen Elizabeth II Stakes from Ascot, and the Champion Stakes, Jockey Club Cup and Pride Stakes from Newmarket. In the new fixture, these became the finals of each of the divisions of the British Champions Series.

The unbeaten colt, Frankel, won the Queen Elizabeth II Stakes at the 2011 meeting, and a year later completed his racing career with victory in the Champion Stakes at the 2012 meeting.[3] The crowd of 32,000 at that meeting was a modern-day autumn flat racing record in the UK.

(Selections posted later in the week)