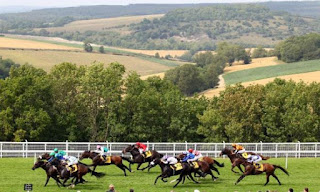 Goodwood Racecourse is a horse-racing track five miles north of Chichester, West Sussex, in England controlled by the family of the Duke of Richmond, whose seat is nearby Goodwood House. It hosts the annual Glorious Goodwood meeting in late July and early August, which is one of the highlights of the British flat racing calendar, and is home to three of the UK's 36 annual Group 1 flat races, the Sussex Stakes, the Goodwood Cup and the Nassau Stakes. Although the race meeting has become known as 'Glorious Goodwood', it is sponsored by Qatar and officially called the 'Qatar Goodwood Festival'.[1]

This is an unusual, complex racecourse with a straight six furlongs—the "Stewards' Cup Course"—which is uphill for the first furlong and mostly downhill thereafter. There is a tight right-handed loop at the far end of the straight on which there are starts for various longer distance courses. These include the 1 mile 2 furlongs (1m 2f) "Craven Course", the 1m 4f "Gratwicke Course" and the 1m 6f "Bentinck Course". The start for the 2m 5f "Cup Course" is quite close to the winning post—horses travel outwards on the straight, around the loop and back. Throughout the loop there are severe undulations and sharp turns. The course is used for flat racing only.

The Goodwood Cup was first run in 1808 and is one of the leading staying races in the country.Stradivarius famously won the race four times in row between 2017 and 2020 and the eight-year-old will bid to make it five Goodwood Cups this year. Arguably the most famous horse to race at Goodwood was Kincsem, a Hungarian racehorse – who won the Goodwood Cup in 1878. Kincsem was unbeaten in a staggering 54 races.

The feature race at Goodwood is the Sussex Stakes – a Group 1 race for milers. The best milers in the world have contested this race over the years, including Brigadier Gerard in 1971, who was on his way to becoming the champion racehorse of his generation. The mighty Frankel, officially the highest-rated horse in the history of the turf, is the only horse to have won the race twice: in 2011 and 2012.

Possibly the greatest race in the modern history of Goodwood was the Nassau Stakes in 2006. This is Goodwood’s third Group 1 race, when the fillies take centre stage. On this occasion, The Earl of Derby’s Ouija Board, one of the superstars of international racing, battled with Alexandra Goldrun – who had won the previous year’s Nassau Stakes. The two fillies fought it out all the way down the Goodwood straight with Ouija Board eventually winning in the closest of photo finishes.