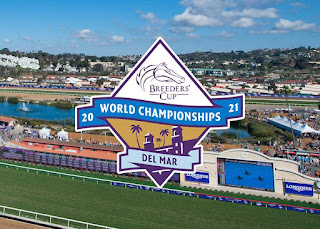 What was once a one-day, seven-race event is now a two-day, 14-race celebration of sport of horse racing. The Breeders' Cup kicks off with Future Stars Friday, comprised of five juvenile races featuring horse racing's brightest rising stars.

Championship Saturday is one of the richest days in racing awarding over $22 million in prizemoney over 9 races, culminating in the defining event of the international racing season, the $6 Million Breeders' Cup Classic.

Founded in 1937 by Bing Crosby, Pat O'Brien, Jimmy Durante, Charles Howard, and Oliver Hardy, the Del Mar Race Track is a one-mile main dirt track and a seven-furlong turf course, which runs during the summer and can stable more than a thousand horses.

On opening day, Bing Crosby stood at the gates to greet fans and bolster national attention. His presence spurred a bright future. A year later, riding a wave of positive press coverage, the ocean-side horseracing jewel hosted a $25,000 winner-take-all match race between the famed Seabiscuit and Ligaroti. The historic event turned out to be a media sensation as well, becoming the first nationwide broadcast of a Thoroughbred race by NBC Radio.

Del Mar will host the Breeders’ Cup for a second time, having done so previously in 2017.

The turf races will be run over firm ground and the dirt will almost certainly be fast. Both courses have the tight, left-handed turns one typically expects from American racing.

Here's what to look out for on November 5th and 6th, live on Sky Sports Racing & ITV

As far as track trends go, it changes around but generally speaking the dirt races have a little bit of an outside flow, or perhaps more accurately, the rail is often not the place you want to be. 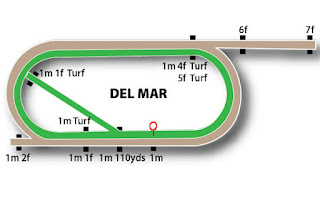 As one might expect, the rail often proves advantageous in turf sprints at Del Mar. Over the past year, rail runners have clicked at a 22% strike rate and yielded an impressive +20% return-on-investment. Outside draws (10+) have done terribly in the same timeframe, 5% winners with a -84% ROI. It’s worth noting that the outside runners have placed 19% of the time, suggesting that there is some unluckiness here. The best projected speeds types do incredibly well: 32% winners with a +25% ROI

As noted earlier, Del Mar often has a dead rail, or at least a rail that isn’t the type of advantage you’d expect. Rail runners in dirt sprints do just OK: 11% winners with a takeout-beating -13% ROI. The outside runners win at a higher rate, 17%, but lose more on a per bet basis: -20%. Projected best speed types do very well: 29% winners with a +4% ROI.

The runners projected to be the best late speed underperform in market terms: 18% winners with a -45% ROI.

DIRT RACES AT ONE MILE OR OVER :

No post position stats of note but that pro-speed trend is here once again with the best projected speed runners winning at 21% with a +9% ROI.

In percentage terms, the numbers for projected late speed in longer dirt races are identical to those in sprints: 21% winners/-28% ROI. In both cases they win their fair share, but the crowd overbets them.

TURF RACES AT ONE MILE OR LONGER :

The pro-speed trend at Del Mar continues in the longer turf races.

Best projected speed runners win at 23% and have a fantastic +38% ROI.

The best late pace runners – who typically excel on turf – win at a lower-than-expected 18% with a poor -45% ROI.

*RECOMMENDED BETS WILL BE POSTED LATER IN THE WEEK*